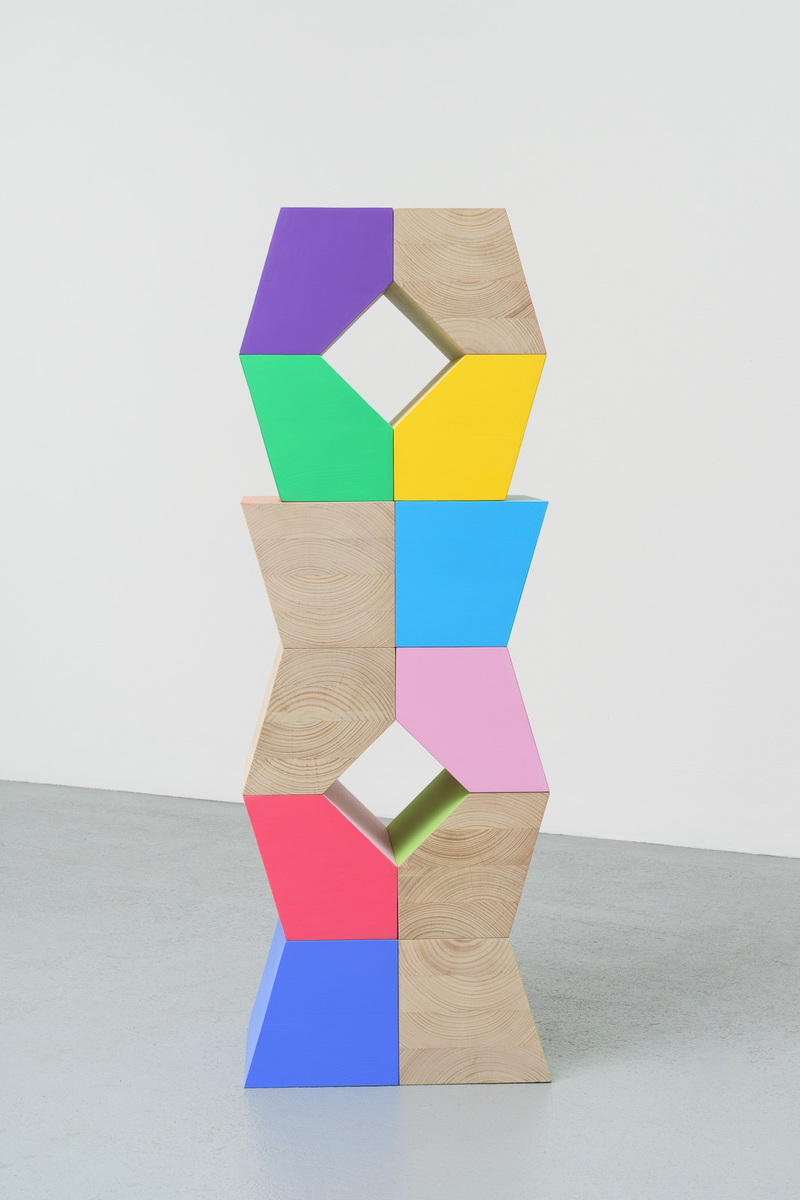 On a recent visit to a historic submarine base in Sydney, Nuha Saad came across an infographic that explained the ‘razzle dazzle’ naval camouflage technique. This was a military practice used during WWI, whereby ships were painted in bold geometric patterns in order to camouflage them and to ‘dazzle’ an enemy submarine commander’s perception of a ship’s size and shape. ‘Razzle dazzle’ made ships a harder target to hit, not only by a passive concealing of the vessel, but by a defensive strategy to mislead and confuse.

The practice of ‘razzle dazzle’ resonated with Saad, who imagined such towering walls of metal painted like mobile artworks, gliding through water in bold patterns. Outside of a naval military context, additional definitions of razzle dazzle as ‘a confusing or colourful often gaudy action or display’ and ‘impressively opulent or decorative’ were equally appealing inspirations for Saad’s exhibition Razzle Dazzle Chroma. This exhibitionI continues the artist’s practice, which celebrates and highlights the myriad attitudes towards the ornamental, the architectural, the decorative and the colourful.

There is a synchronicity between razzle dazzle submarine designs and Saad’s earlier works. Previous exhibitions were named after the huge cargo ships, which passed the artist on her daily travels – vessels with walls of enamelled colour that stirred in Saad a nostalgia for her parents, and the many migrants like them, who made their way across the world by ship in search of a ‘better life’.

Through the use of bold, colourful patterning, Saad sees her sculptures as types of decoys, aimed at obscuring forms and confusing their viewer. This draws audiences into the work in order to better view and experience the sculptures up close. By inviting the viewer out of their own space and into the realm of the artwork, Saad engenders a new experience of physical engagement with her work where reality and perception are questioned, blurring the line between the realms that viewer and artwork inhabit.

Saad believes in the positive and transformative power of colour, and is excited by the possibilities that particular colour combinations present. The artist uses colour both formally and intuitively – formally, through the exploration of the traditional artist colour wheel and its defined relationships between primary, secondary and tertiary colours and their corresponding complementary, harmonious and oppositional relationships. And intuitively through her exploration and play in the studio, where rules about colour need not apply. For Saad, colour is the site within her practice where the geometry of minimalism and the ornamental meet, intersecting both formally and intuitively, to achieve balance.

Most recently, Saad has been working with turned wooden posts, which are typically added to buildings for both structural and decorative effect. Used in historic and contemporary architectural design, the post, totem, or column, is a transhistorical architectural form, used throughout Western, Eastern and indigenous cultures. The post, typically a vertical element, is commonly used as a support, however it can also be non-structural and viewed as a freestanding monument. Saad’s use of this familiar historical form is intended to evoke a sense of place and audience familiarity. Her works draw a connecting line between the ornamentation of our times, to a place where an inherited self is defined and projected. In this way, Saad’s explorations in colour, ornament, pattern and form are used as a means of forging relationships across cultures, places and shared histories. Her work actively shifts its audience’s perception of shape, history and self through colour and form – razzle dazzle chroma.

Nuha Saad is a Sydney based artist, whose work is gaining increasing attention for its spatial dynamism and play. Saad holds an Masters of Visual Art from Sydney College of the Arts, University of Sydney (1999), a Graduate Diploma of of Education from the University of Sydney (1991) and a Bachelor of Visual Art from the City Art Institute (1988, now UNSW Art and Design). A selection of Saad’s slew of awards and finalist nominations, include a 2022 finalist position in the Beechwood Art Award; in 2021 Saad was named a finalist in the Ravenswood Australian Women’s Art Prize; in 2020 she was named a finalist in the Tom Bass Sculpture Prize; and in 2019 she was a finalist in both the Deakin Small Sculpture Award and the Rookwood Hidden Sculpture Prize. She has received numerous major public art commissions, and has exhibited extensively both nationally and internationally. Her work is held in the collections of ARTBANK, City of Sydney, Randwick City Council and Royal Melbourne Hospital, as well as private collections throughout Australian and the US.