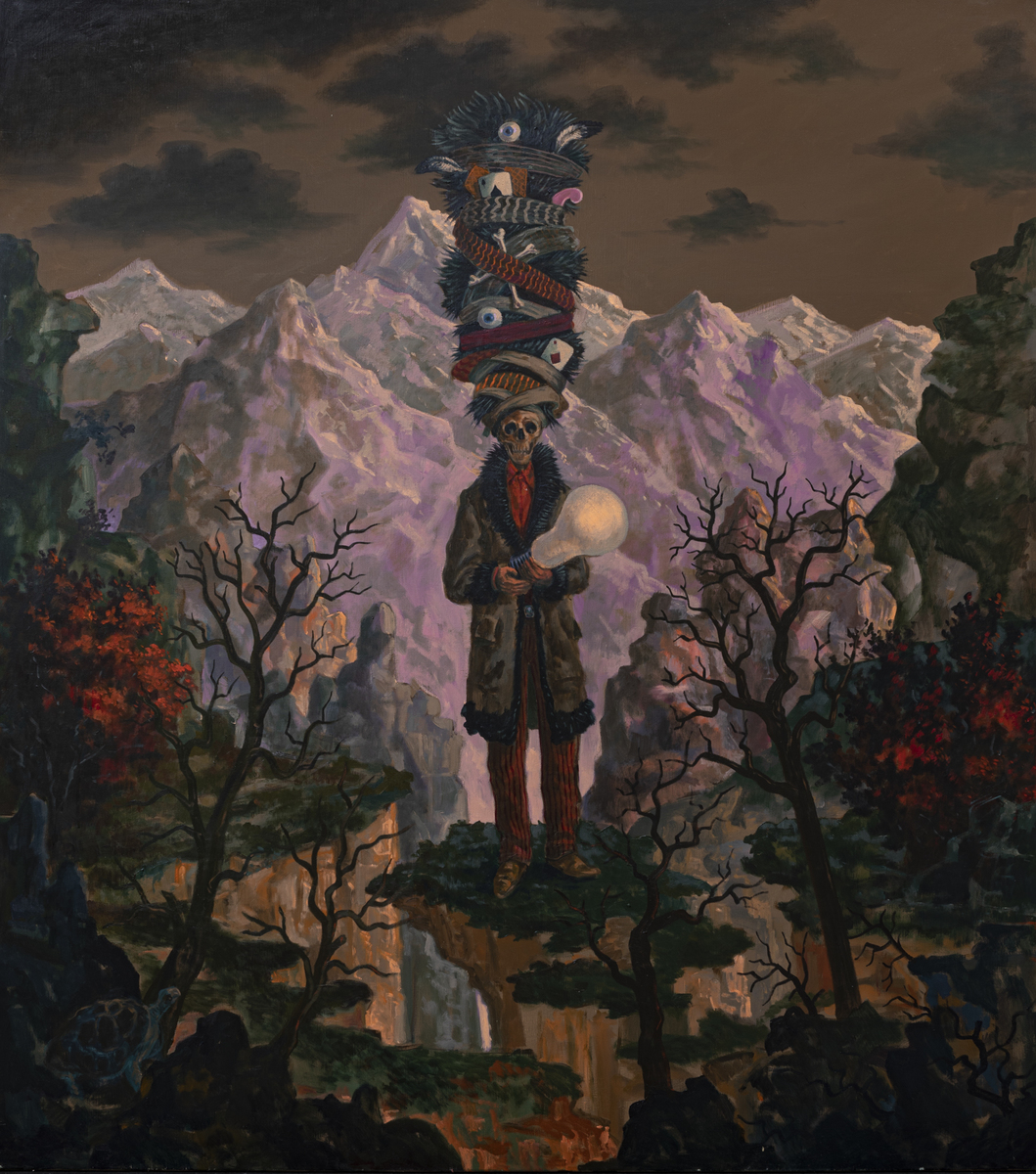 For his 2022 Melbourne Art Fair solo presentation, Michael Vale presents After the Deluge. This major body of work takes its title from a poem by Arthur Rimbaud, which describes the morning after a great flood, as viewed through a spider’s web. Seeking not to illustrate the poem literally, this body of work instead takes inspiration from the poet’s use of freely interconnecting imagery.
Over time Vale has compiled his own collection of compositional elements – recurring imagery of skulls, mummies, mushrooms, speech-bubbles, pipes, eyeballs, turbans, tall hats, binoculars, playing cards, and lightbulbs – which he spontaneously arranges in romantic settings. This allows both the imagery and the viewer to form their own, unfixed narratives. Subsequently, any meanings derived from Vale’s interconnecting elements are necessarily fluid and absurd – meaningless scenarios played out by ghouls, ghosts and mummies. The vertiginous mountains and landscapes in Vales paintings are entirely imaginary, settings for unsettling dreams rather than homages to the natural world.

Vale is fascinated by the mysteries of ‘old master’ paintings, viewing them as an endless supermarket of free ideas (to paraphrase the critic Charles Jencks). These are ideas that Vale stresses the importance of unlocking. The idea that a painting can release and divulge its secrets over time is not just a source of inspiration, but an ambition; it is a dynamic that Vale strives to channel, based on his own discoveries, made from gazing at a million pictures.

After the Deluge offers darkly optimistic paintings, ambiguous but humorous, and open to whatever interpretation the viewer prefers.

Michael Vale is highly celebrated for his gothic absurdist style. In 2021 he was awarded the Doug Moran National Portrait Prize, and is a three-time finalist in the Archibald Prize – 2019, 2013 and 2012. In 2018 he received the Hutchins Australian Contemporary Art Prize and in 2017 won the Bayside Acquisitive Art Prize. Recently, he has been shortlisted in the 2019 Arthur Guy Memorial Painting Prize. In 2006 he was awarded Best Film on Art at the prestigious Asolo Artfilm Festival in northern Italy for his video work, The Long Walk. In 2006 he completed a PhD in Fine Art at Monash University, where he is a Senior Lecturer in Fine Art.