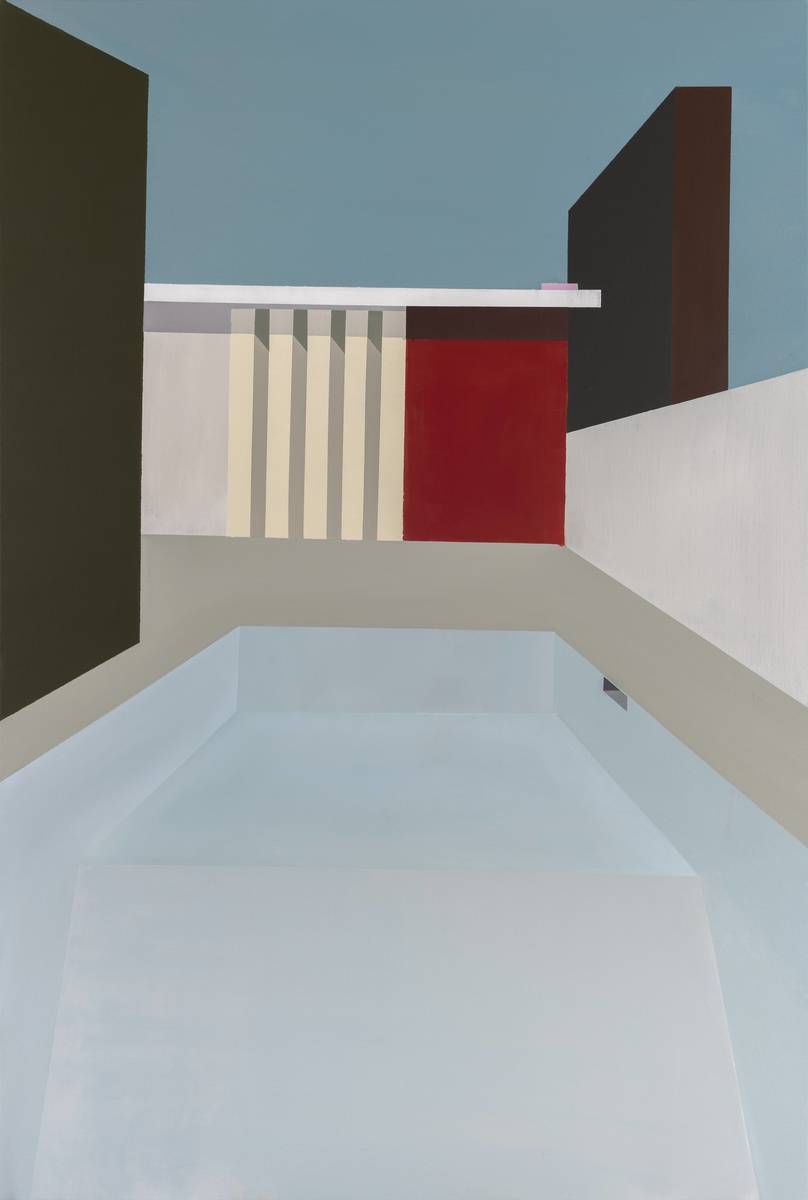 For her latest exhibition, Fine Form, Annalisa Ferraris pushes her hard edge minimalist
background, developing and her refining her practice through an exploration of the intersecting aspects of familiarity and imagination. In Fine Form, Ferraris creates spaces that feel familiar, yet exotic, reminiscent of travel and places once visited, dreamt of returning to, and longed to experience. This body of work is less about a particular subject and more about a feeling. Where her previous work has been discussed in formal terms – her idiosyncratic hard lines and pastel colour plains – here formal construction takes a backseat and instead acts as a conduit for something entirely cerebral and emotive. While Fine Form features Ferraris signature empty swimming pools and architectural divisions of the painted surface, the artist no longer references literal spaces. Instead, leaving it up to the viewer to construct a sense of place and memory.

A recent Neurological study conducted by the Frontiers in Human Neuroscience indicates
that abstract art reduces cortical brain activity. The study claims that through the reduction of such activity, abstract art has the ability to free our brain from the dominance of reality, enabling it to flow within its inner states. This, it is asserted, creates new emotional and cognitive associations by activating brain-states that are otherwise harder to access. Perhaps, in a world full of turmoil, an escape from reality is what’s needed, psychological or imaginative; welcomed non the less. For Ferraris, this insight to the inner workings of the brain and its relationship to abstract art is an extension of the underpinning escapism and imagination of the foreign locales of Fine Form: “I wanted this show to evoke more with less, to take us places as far and wide, as limitless as our imagination- with a map that gives as little information possible.”

This current body of work is heavy in jewel tones. Deep reds and browns sit on a checkered floor, looking out onto what could be interpreted as a vast ocean. These components comprise the visual map provided to visitors, pulled from the memory of the artist’s time spent in Morocco. However, through their abstraction, this work can easily transport the viewer somewhere else.

Fine Form is an exhibition about nostalgia, minimalism and the desire in all of us to explore the unfamiliar – be that cerebrally, physically or both.